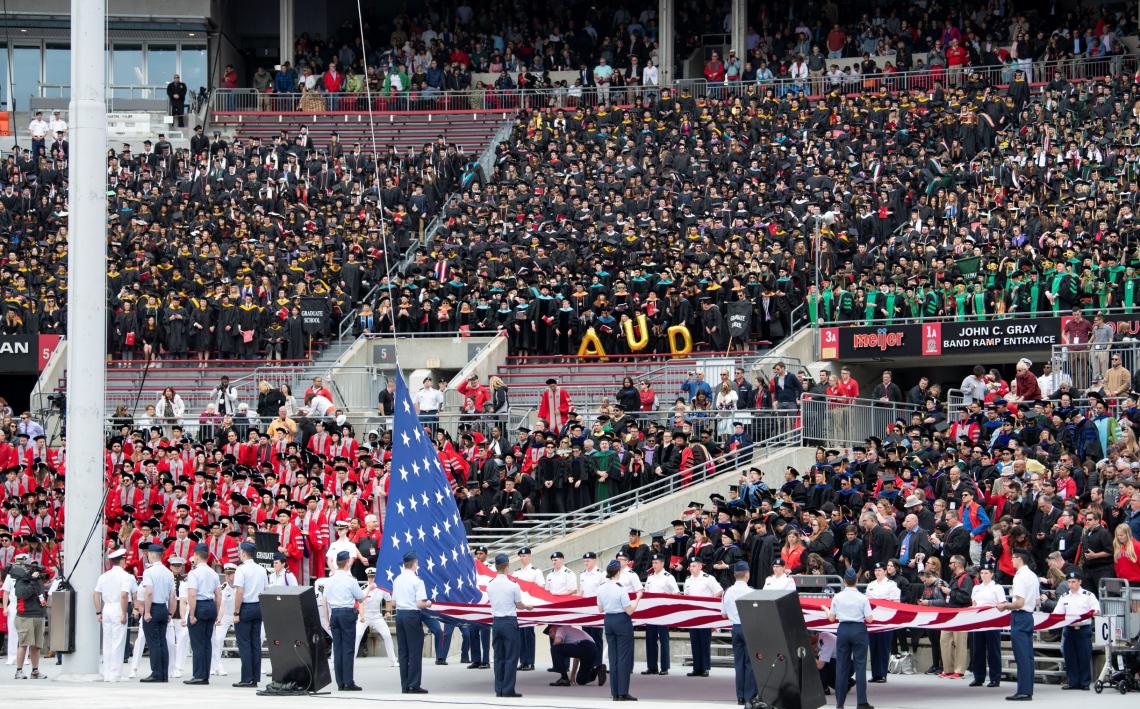 Join us in this celebration that marks the academic achievements of Ohio State graduates.

The ceremony begins at 12:00 p.m. and will last approximately 2 1/2 to 3 hours. Tickets are not required for guests.

Participation in the ceremony is reserved for graduates of spring semester only. Graduates who have elected to participate in the commencement ceremony should remain for the entire ceremony.

The President, Provost, and cadet marshals will provide directions to graduates throughout the course of the ceremony. Please listen carefully to their signals.

Guests should be in their seats by 11:45 a.m. as access to certain areas will be restricted after this time until the processional has concluded.

Graduates should be seated immediately upon reaching their seats.

Please stand at the President's signal.

Conferring of the PhD

The Provost will ask all PhD candidates to rise and the President will confer the degree. Led by the cadet marshal, candidates will file to the platform, one row at a time. There, each candidate will receive the hood, cross the platform, receive their diploma from the President as their name is called, return to their seat and be seated. As a courtesy to all others receiving diplomas, we ask that all PhD graduates remain for the duration of the ceremony.

Conferring of Other Degrees

The Provost will ask the graduates from each college to rise and will present them to the President. When all colleges have been presented and are standing, the President will confer the degrees.

Graduates and guests will be led in the singing of the alma mater.

Graduates will rise by rows and move to the diploma boxes as directed by the cadet marshals. Except for the PhDs, graduates' names are not called as the diploma is received.

A note about diploma issues: While every effort will be made to ensure that each graduate will receive the correct diploma during the ceremony, if they do not, the graduate should go to 281 West Lane Avenue, first floor, immediately following the ceremony. Limited assistance will be provided there for diploma problems (misspelled names, wrong diploma) from 2:30 to 5:00 p.m. on commencement day.

A graduate may receive a letter instead of a diploma at commencement for one of two reasons: 1) the graduate has a "hold" on their record and should follow the instructions received for resolving the hold, or 2) the processing and certification of the degree requirements was incomplete as of 12 p.m. on Saturday, May 7, 2022, and the university cannot release the diploma without additional action on the graduate's part.

Questions about academic eligibility to receive a diploma must be referred to the college office or academic unit, which may be contacted on the Monday following commencement. Once degree certification questions are resolved, contact Buckeye Link at 614-292-0300 or buckeyelink@osu.edu about claiming the diploma, and be sure to explain that a letter was received instead of a diploma at commencement.

If a graduate notices a spelling error in the name on the diploma after commencement day, follow the instructions for a diploma correction.

After receiving their diploma, each graduate will remain in line. Lines will proceed to the south end of Ohio Stadium to disperse outside. To avoid congestion, graduates should move away from the exit portals as rapidly as possible.

As a courtesy to all those attending commencement, graduates and guests are asked to refrain from using horns and other noisemakers during the ceremony.